Ryka Aoki is the author of Seasonal Velocities, He Mele a Hilo (A Hilo Song), Why Dust Shall Never Settle Upon This Soul and The Great Space Adventure. Her latest novel is Light from Uncommon Stars.

Ryka’s work has appeared or been recognized in Vogue, Elle, Publisher’s Weekly, Bustle, Autostraddle, PopSugar, The Daily Dot, The Guardian, Buzzfeed, The San Francisco Bay Times, and the Huffington Post. Her latest poetry was part of “Are you okay?” curated by Franny Choi at Smithsonian Asian Pacific American Center, and she was honored by the California State Senate for “extraordinary commitment to the visibility and well-being of Transgender people.” 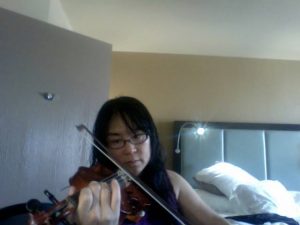 Aoki’s work appears in many queer and mainstream publications and anthologies, and she was honored to work with the American Association of Hiroshima Nagasaki A-Bomb Survivors, where two of her compositions were adopted as the organization’s official “songs of peace.”

Ryka also appears in the recent documentaries “Diagnosing Difference” and “Riot Acts,” as well as writing for and acting in the award-winning film “Transfinite.”

Ryka was the inaugural performer for the first ever Transgender Stage at San Francisco Pride, and has performed in venues including the Sundance Film Festival, San Francisco Pride Main Stage, Barnard College, the National Queer Arts Festival, Yale University, UC Berkeley, UCLA, the University of Iceland, the University of Winnipeg, and Ladyfest South. She has an MFA in Creative Writing from Cornell University and is currently a professor of English at Santa Monica College. She is Japanese-American.

She is a two-time Lambda Award finalist, and winner of the Eli Coppola Chapbook Contest, the Corson-Bishop Poetry Prize, and a University Award from the Academy of American Poets.

She is also a professor of English at Santa Monica College, a half-decent pianist, and is starting to learn to play the violin.

One of the nicer ways to start the day. 💖

Omg! The Otherwise Award means a lot to me.🏳️

My mother’s ukulele next to my grandmother’s u

“I Love You a Laksa” Risotto at Kapa Hale. My

Life in Hawaii. What I especially like about this

My books are here! (@dashophnl in Honolulu) Please

This is going to be amazing! I can’t wait! https://t.co/JaJ7g9iHf1
View on Twitter

THANK YOU for bringing our work to so many super wonderful readers, @torbooks! ✨🎵✨ryka https://t.co/aTH0o7LKx6
View on Twitter
1
39

One of the things that unites us as a nation is knowing that no matter who we are, where we came from, or how we identify--some dude with an axe to grind can come into our neighborhood and shoot a bunch of people.
View on Twitter
9
42

So the shooter might be Asian. This does not surprise me. It should not surprise anyone. Desperate men have shot innocent people for so many reasons. But they are always terrible reasons. https://t.co/KQ2kmbXWbm
View on Twitter
0
10

Oh...crap... Monterey Park. Near Garvey and Garfield. Thinking of all who were lost, all who were injured, all who must begin the Lunar New Year with grieving and tears. #montereypark #sgv
View on Twitter
2
41